Everything You Need To Know About VIP Greece Islands Airport Guide 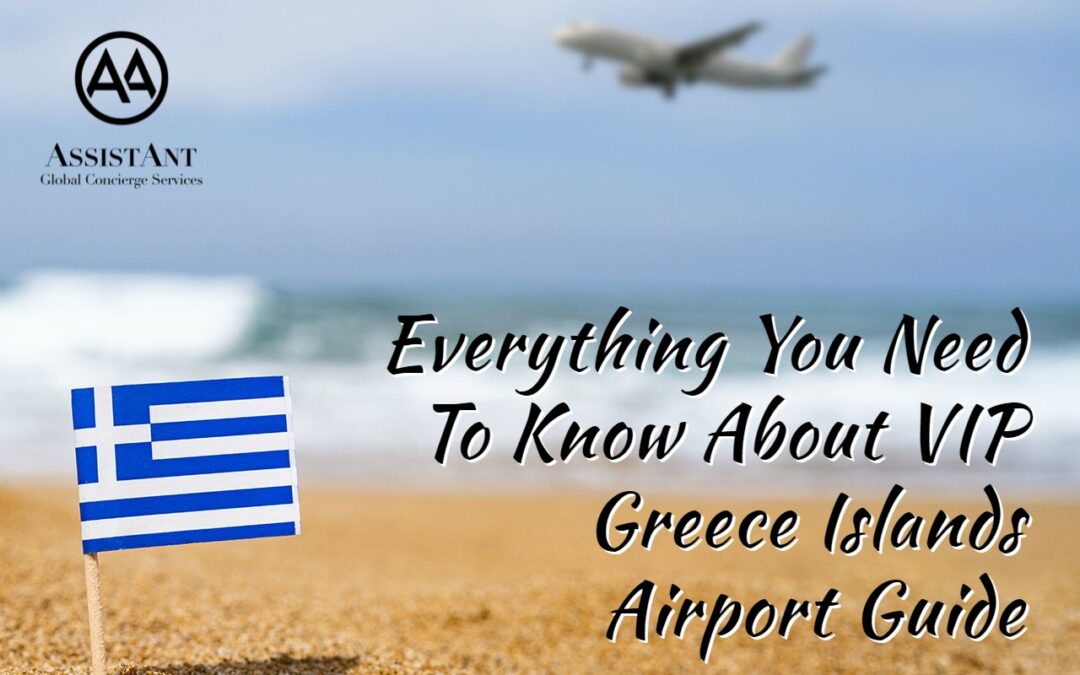 If you’re looking for VIP airport services for the Greece islands, this guide will tell you everything you need to know to make the arrangements.

Sparkling seas, crystal-blue skies, and storied hospitality — there’s a reason the Greek islands have been a premier destination since ancient times. They remain some of the most luxurious places you can visit in the world. And when you arrive at any of the Greece airports, you’re going to want that same luxurious touch in making your way around.

AssistAnt is a global concierge service with nearly ten years of experience providing VIP services to international travelers. We are committed to making your international journeys easy and stress-free no matter what part of the world beckons you.

The Greek islands are no exception. AssistAnt’s team is ready to greet you at whatever arrival point you choose amidst your many compelling options.


Corfu is incredible and unique, with its wide variety of sights and landscapes — gorgeous countryside, mesmerizing beaches, and captivating castles alike. There are five-star resorts across the island, including in the towns of Kanoni, Dasia, Kassiopi, and Kommeno.

The Corfu Airport, also called Ioannis Kapodistrias Airport, is the major airport on the island of Corfu. Both scheduled and chartered flights from Europe land here daily. 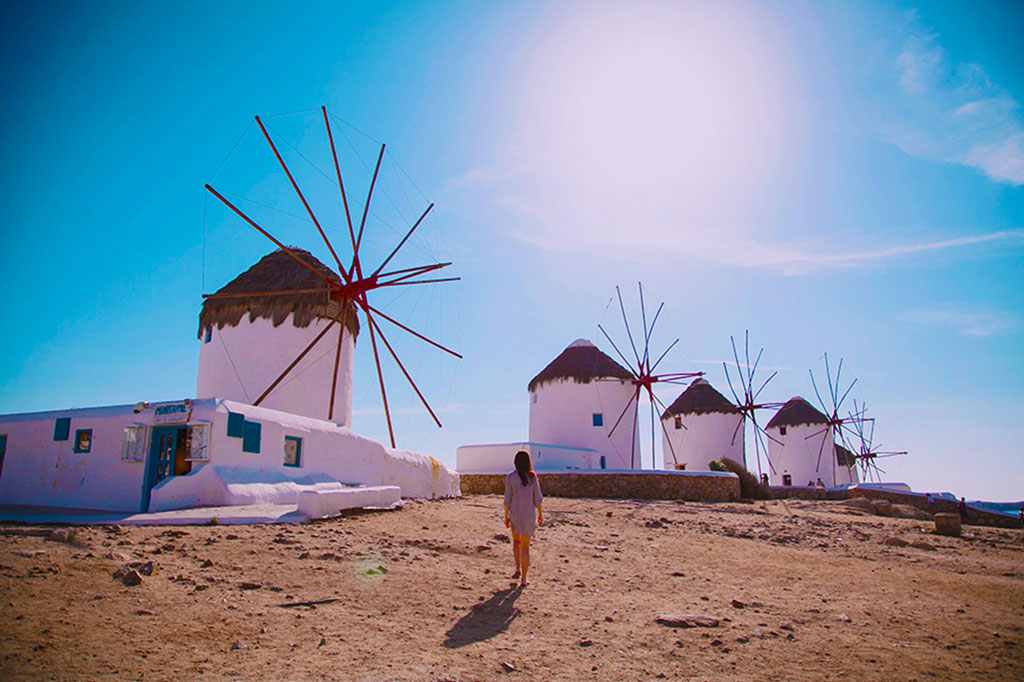 Mykonos is known for its nightlife, but it’s also perfect for luxury travel. You can stay at one of its many villas and hotels, and from there, watch beautiful sunsets over the Aegean sea. There is a wide variety of restaurants and bars across the island too, and you’ll even have the opportunity to rent a motorbike or charter a sailboat to see even more incredible sights.

Mykonos is a hugely popular destination on a seasonal basis. Their high season is the summer, which is when the Mykonos Airport has its widest range of operating hours.

Looking for one of the most magical luxury experiences in Greece? Santorini is one place you can’t miss. Oia, also known as one of the most photographed places in the world for sunsets, is just one incredible spot you can look forward to seeing on this island.

Santorini, being such a popular destination, has a reliable hub. Santorini’s airport is one of the more well-known among the Greek islands. Located near the Kamari village, it isn’t that big in size, but it’s certainly a busy airport, and it accommodates flights from several airlines, including Ryanair, Olympic Air, and Aegean Airlines.

Kos is a smaller island off the beaten path, but it still has so much to offer. There are several beaches, including windsurf-friendly Psalidi Beach, as well as historical sites, ruins, and churches. Luxury travel aficionados might appreciate their many boat trips to neighboring islands Kalymnos and Pserimos.

The airport in Kos is also called the Hippocrates Airport. When it comes to Greek islands with airports, this is one of the smaller airports. But it is still a major tourist landing point — every summer, Kos’s airport records very high passenger traffic.

Rhodes is the largest of Greece’s Dodecanese islands. Some of its many luxurious sites include Kallithea Springs, the Palace of the Grand Master, and Ixia Beach.

The Rhodes Airport also called the Diagoras Airport, is on the west side of the island. It services many other European destinations during the high season.

Chania is one of the main cities on the island of Crete. It’s a gorgeous place that offers you not only beautiful beaches but also ancient sites such as the Venetian fortress and Church of Agios Nikolaos.

The Chania Airport, or Daskalogiannis Airport, is one of Greece’s biggest international hubs. It offers several connections to other cities across Europe.

Heraklion is another main city on the island of Crete. It has several archaeological sites to explore, including Knossos Palace. It’s also a port city that has several excellent beaches for you to visit and enjoy.

Airport Heraklion, also called Nikos Kazantzakis Airport, is the second busiest in all of Greece. It offers connections to over 100 other places across the globe, and services flights to Europe’s biggest hubs.

Zakynthos is a beautiful island that is fantastic not only for beach visits. There’s also a great deal to do for art and wine lovers. There are several wineries and museums across the island to light up your senses and make your stay that much more intriguing.

Zakynthos’s airport is also known as Dionysios Solomos and is located near the town of Kalamaki. It is the main airline hub on the island.

Thessaloniki is also called Greece’s second city and was founded over 2,000 years ago. It offers so many interesting sights to visitors, including the Thermaic Gulf, Aristotelous Square, and the White Tower. Historic buildings and renovated neoclassical mansions across the city have been converted to luxury hotels.

Thessaloniki Airport, or the Macedonia Airport, is in Thermi near the White Tower landmark. 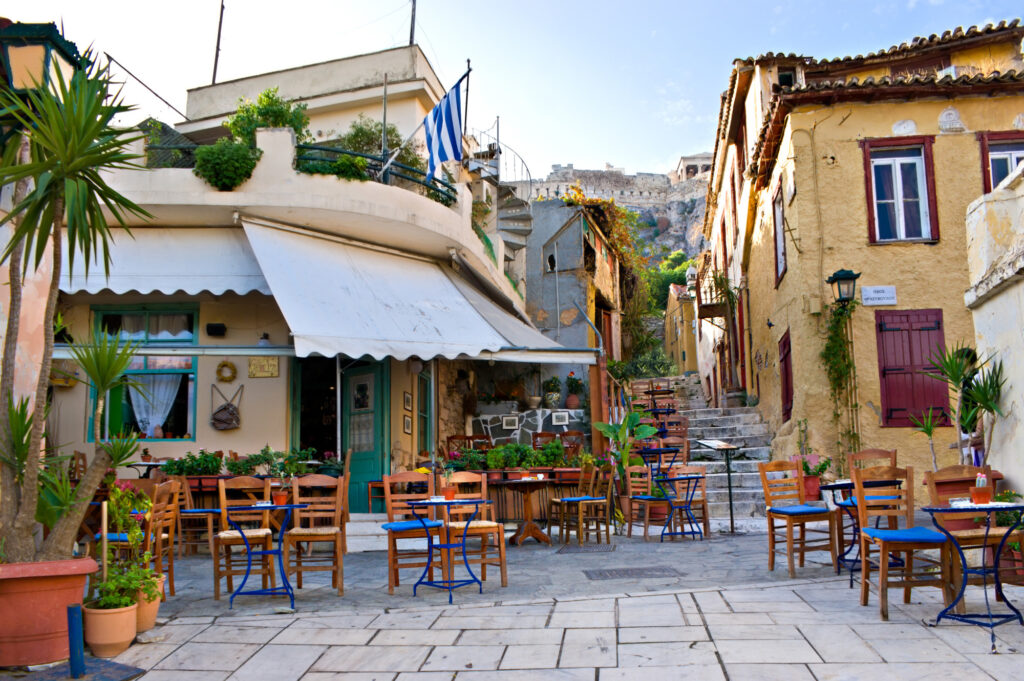 Even though Athens is part of mainland Greece, it definitely deserves to be included in any Greece islands guide. It is not only a historical city, but it has also grown to be a cosmopolitan destination. In addition to the ancient ruins and world-famous museums, there are also numerous restaurants, bars, and entertainment options for you to explore.

The Athens International Airport is a major hub for anyone looking to visit the city, but it’s also your main point for visiting any of the other Greek islands. Whether your next stop is Santorini or Rhodes, your connecting flight to any of the other airports in Greece will most likely start here.

No matter which of the Greece airports provide the start to your luxury vacation, AssistAnt’s VIP services can guide you as you embark on your Mediterranean adventure.

Once you land at your destination in Greece, having one of our standard or fast-track VIP airport packages booked in advance will ease your arrival and make your stay that much more incredible. You can even book one of our VVVIP airport package for international destinations, which includes private vehicle services and personal escorts to and from the airport.

If you’d like to learn more about which of our services would be right for you, be sure to contact us so we can walk you through every detail. You deserve to have an international experience catered to your every need.

Thank you for visiting.

Contact us anytime to request information about how we can help you with all your travel needs.
Contact Us

Global Travel Concierge Make a wish and we will make it happen.